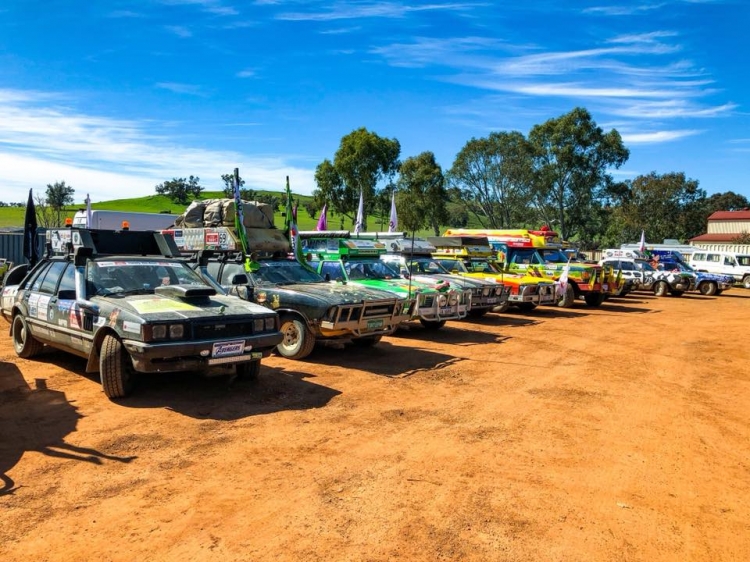 After weeks of rain, storms and overcast days, the scheduled arrival of the Variety Club Bash cars at the Quindanning Hotel somehow managed to bring sunshine, smiles and lots of noise!

We met up at the Drakesbrook Hotel Motel ready for a 9am departure and set off on the back roads to Dwellingup where some filled their coffee cups while others - ok just one - filled their tyres with air. The air up there at that altitude has to be quality right? :D

Within half an hour we were off, our multi-coloured convoy winding it's way through the hills en route to what was sure to be a great day out. The relatively empty car park confirmed that we hadn't missed anything yet and there was a buzz in the air as the Variety Club officials were making preparations.

Before long the sound of the Beach Boys could be heard getting louder, competing with sirens, songs from Frozen and the rumble of almost 30 cars so bright that even a tub of crayons would be jealous. The car park was full and drivers dressed in theme with their cars brought stories, inspiration, goodies and most of all - smiles to everyone. The bonnet of one car boldly proclaimed "It's All For The Kids!" and each and every one of the participants lived up to that. The kids thought it was Christmas they got that many toys!

After some food and a few drinks, we watched the cars set off to their next destination and we ourselves set off homeward bound.

Making a quick pitstop at Nanga Townsite, we stretched our legs before deciding to check out the Waroona Dam which was overflowing for the first time in something like 20 years or more. It really was a great sight to see the water flooding down the spillway, though the trek up the dam wall reminded you of how unfit you are!

All in all it was a fantastic day out with great friends, family and food. Looking forward to the next run already!